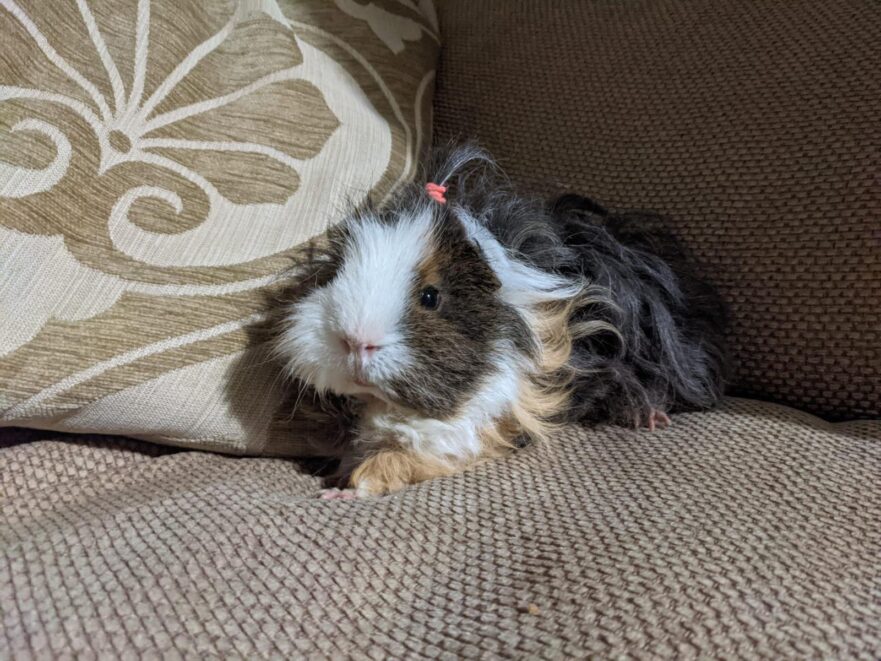 It’s a new day and we are off to collect a new friend for Chester. His name is Levi. Chester is our remaining American guinea pig. Mak our beautiful alpaca guinea pig unfortunately passed.

The previous Friday, Mak started to show symptoms of being very poorly – football training finished around 9 pm and initially, when my daughter Annie and I arrived home I noticed something was wrong with him… At around midnight we decided to call the emergency vet in Coventry and Annie agreed that if I stayed up with him to keep an eye on him as he was in pain, we could take him to the local vet first thing.

Guinea pigs are a prey species. This means they hide signs of illness to avoid appearing weak to predators. For future reference, Levi and Chester can be weighed on a more regular basis…We did weigh them but small animals go downhill so fast… By the time something is noticeable it’s often too late. Mak passed away peacefully on Annie’s lap. We had just got him a fresh warm blanket and a warm hot water bottle. When Mak had started to be ill he licked Annie’s hand which is a sign of affection and a sign of the bond they had. Since Mak was 3 weeks old Annie had taken such close care of him.

Bringing the adorable Levi to his new home:

Levi comes from a rescue centre – he is four months old and was the only one of his litter – meaning he is almost as big as Chester at 2 years and 8 months, with short hair like Chester. We were looking for another Alpaca but it would be better to have two of the same Guineas. In case we don’t get one out more than the other (Mak was hard to catch and the long hair meant he brought half the bedding with him). Longhaired guineas need a lot more care and commitment.

I felt right to get another rescue piggie.

A rescue cage isn’t that big and if you’ve seen how my guineas live (on our zoom classes) you know they have the run of the house here pretty much!

Levi’s previous owner surrendered him to Beech tree bunnies in Kibworth, after unsuccessfully trying to pair him with his father. Levi’s father rejected Levi- which may account for his shyness. Levi reminds me of Chester at that age… We got Chester in April 2020 at four months. Chester started off nervy, jumpy and skittish. My son Shay, sat with Chester on his lap for months of lockdown. Chester became so outgoing, confident and a real lap pig.

I hope we can do the same for Levi and he will have a happy life with us.

Annie has her eye also on another Guinea called David. However, David already lives with one called Vinnie and they are big pigs. On the other hand, if anyone is looking for guinea pigs – they are great pets and less restrictive than cats and dogs. There are a lot of guineas and rabbits like David and Vinnie. Both surrendered to rescues and you can figure out why. David is a long-haired black and white and Vinnie is my favourite colour – a short-haired lilac and red.

Anyway, thank you for reading this. Hopefully, you have a lovely Christmas. Here are Mak and Chester from last Christmas.

Levi looks like he could be Chester’s son and they have taken to each other really well.

Even if after a week Levi is almost as big as Chester!

Chester seems to go and get Levi so they can eat hay together & they chill out near to each other despite having a massive area to live in.