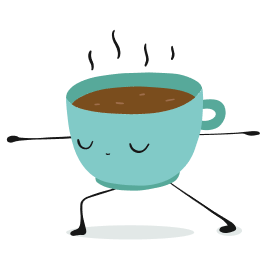 98 million a day. That is how many cups of coffee we in the UK consume every single day! But, how does this relate to yoga? There has been a continuous debate surrounding the usage of ingesting caffeine before practicing yoga. Coincidentally, the article aims to outline whether caffeine has a positive or negative effect on your yoga practice? Or, if it has any effect at all? Most importantly, how do you like your coffee in the morning?

An argument for coffee and yoga:

Some yoga experts have the opinion that coffee should not interfere with your yoga practice, within moderation. Henceforth, drinking a cup of coffee in the morning does not have any physical effect on yoga later in the day. Coffee can also have its advantages, especially for the more dynamic and physical forms of yoga such as Ashtanga Vinyasa Yoga. The boost of energy can go a long way for those days that are particularly lethargic and lack the proper energy you need for Ashtanga.

An argument against coffee and yoga:

The short-term effects of drinking coffee can include increasing stiffness in the body. The increased tension in the muscles is likely to negatively affect your ability to engage in the free-flowing nature of yoga. Furthermore, coffee has always been associated with the by-product of jitteriness and a degree of anxiety. Yoga practices such as Asana require complete mental focus as a key component of the yoga practice. The ‘top-up’ of energy coffee provides can directly lead to the distraction of the mind. As a result, coffee in this example would hinder your ability to fully master your yoga.

Truthfully, there isn’t a right or wrong answer regarding drinking coffee and performing yoga. The arguments for and against it and somewhat balanced. As a finishing statement, the most important thing in all of this is balance. Moderation is the word of the day. If you want to carry on avoiding coffee before performing yoga that is fine. On the other hand, if you want to enjoy your Starbucks coffee before class, be my guest. However, try to avoid consuming coffee to the extreme – listen to your body and how it’s able to perform under the influence of caffeine.